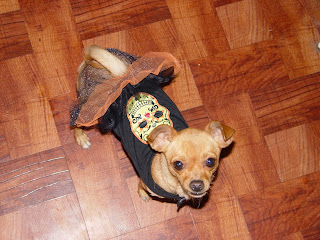 She was found on the side of the road, in an industrial area, the Sunday after the 4th of July,  a stressful time for many pets.

We traveled a road not intended (yeah right). She met my eyes as we drove by. I told my brother, "we have to turn back".

"Dog lying on the side of the road", I said.

"This one was viable", I said, as others on that road were no longer.

A tiny Chihuahua lay on the side of the road. As I kneeled down next to her, an impressive array of teeth were bared. I would too had I been hurting so bad.

I took off my trusty big shirt and scooped her up. Half way across the road, her display stopped. She sensed trust. A hawk called as we walked away, no doubt holding the space for healing. He could have snapped her up a long time prior.

I ran energy till we got to our destination. She settled. After getting home, her broken right hind leg was set. The front right seemed to have radial nerve damage as the limb seemed elogated and unable to hold weight. A dose of Arnica 1m and she slept like a baby. That eve Symph 200c was given. She would only drink, she told me what kind of food she ate - so I got some. But she chose to fast the first day, her organs had taken a beating, whatever way one chooses to tell themselves of how her injuries occurred. By the second day she chowed down greedily.

You could tell she was a crate dog, the sun was such a friend to her. Her baby teeth retained, though the permament teeth had sprouted. Malnutition, an understatement. Good sun, good food, TLC, in less than a week she attempted to stand. By the second week, she could hobble slowly about the yard, plopping down for pick up when she got winded.

By week 4 she took off her makeshift cast on the right hind herself and the right front bootie to help stablize her leg (Hyper 200c and Ruta 200c did wonders for the "flipper" foot).  Tissue salts completed her healing.

It didn't take long to befriend the existing pack. Goldie the Golden/Shepherd mix is her best ally. It is truely something to see this odd couple play. 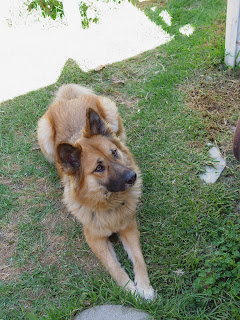 Winston, reserved at first, loves to play as well with his new found friend. 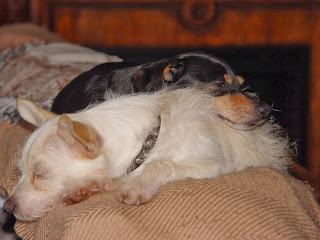 Makes for one happy Phife! 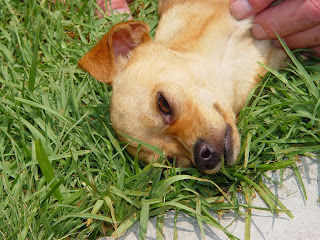 I appreciate your thoughts and comments, either on this forum, or those that contact me privately. Be well and be blessed!