Synchronizing With the Land

It’s been 30 years since I graduated high school. I never thought I’d be back, but here I am, walking the old pastures of as I did back then.

Imagine my surprise when I saw all the glorious old healing herbs my mother taught me about as we walked Mr. Brown’s field, growing up in . 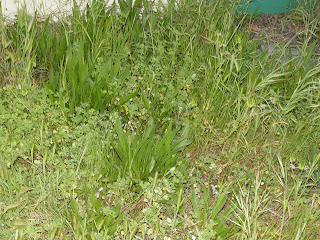 The land changed drastically since then. Modern herbicides and homogenized, mono-cultured agriculture does not foster these “grandma herbs” as I lovingly refer to them. Weeds they are called. Culled and demeaned like witches of old, for simply knowing the wondrously serendipitous ways of healing, as only nature can.

Herbs like Mallow, known for its affinity to heal respiratory issues, the thyroid, malignancies of the throat and so much more.

Plantain (2 varieties), heals the skin, leg ulcers, Nettles, Shepherds Purse, Wood Sorrel and more, a plethora of fine healing herbs for bees and other pollinators to spread their healing joy, a most necessary base for the foundation, the soil of healing.

Some of the young folks volunteering to reclaim the garden helped to harvest the herbs. It was a good exchange of how school has changed from back in my day to their present experience. The horses loved the find these gracious young folks helped to harvest. It takes a good amount of foliage to keep such large creatures tuned. The find was truly a treasure.

These plants once grew in abundance around homes, the plant often growing where the beings were in need of the plants’ healing potential. That innate wisdom only the Great Mother Earth can provide all her offspring.

I have enjoyed the great fortune of spending decades with my beloved horses on trails in deep canyons where wildlife, flora and fauna can be observed. In silent osmosis, I witnessed the innate wisdom creatures of all sizes and shapes, exhibit when the seasons change, the individuality of seeking out the plants they need, where these plants choose to grow best and how they grow in cycles of abundant rain, verses drought. This was a 30+ year education that no university offers. Luckily The Great Mother is still the best teacher to those students that observe and absorb Her wisdom, at no charge.

In recent years the use of Roundup herbicide makes these healing friends of old a distant memory, a weed to be destroyed. The honor of old self- sufficient healing ways obliterated. As these plants gently cleanse the major organs of liver, kidney, lungs and spleen, “dis-ease” is kept to a minimum. This is the original “self-medication”, the true prevention of disease as opposed to the overpriced and disempowering modern version of medicating and surgical means of intervention, suppressing and firmly rooting “dis-ease”.

Once Roundup is sprayed, it is recommended that livestock not graze that land for a period of 4 years. Think about this, a great deal of humanity eats tons of conventionally grown produce sprayed with this poison (this doesn’t even include the GMO damage). If CAFO produced meats are included in the diet, the human is at the end of a very toxic food chain, compounding chronic illness that abounds.

The following photographs chronicle land changes as Roundup is sprayed to abate “weeds”. The first growing season following the application of Roundup results in a bloom of “superweeds”. They grow abhorrently large with a vengeance, in segregated bunches. Perhaps this is natures way of combating the toxin, just as sage is generally the first plant to grow after wildfires (ash has its own healing properties), these plants may somehow try to initiate healing of the land, time alone will tell.

If the Roundup is again used to combat these plants, the growing season that follows begins to show sterilized soil. Acres and acres of barren land, void of pollinators and everything further up the food chain (including humans) that depend on this basic foundation of sustenance, the soil and her bounty.

As many farmers and gardeners move towards holistic land management, riparian buffers are part of the landscape. These are areas of farmland that are allowed to return to their “wild state”, weeds, or healing plants, depending on perspective, are allowed to flourish as the land slopes toward watershed areas for the purpose of leaching farming chemicals, before they reach the waterways.

These areas are important as they not only help to insure a cleaner water supply, but also allow the land to remember her ways. The soil organisms, the healing herbs that are so vital to the health of pollinators and most likely so much more that we will never truly understand. The also serve as corridors for wildlife.

The significance of this has merit in backyard gardens as well. Though it may not be in the direct path of a waterway, such an “original” blueprint for the garden will provide that innate wisdom of what is needed for healing in the form of soil organisms, healing plants and an honor for what was, to serve as a bridge to what will and can be. The old ways should not be forgotten, for to this day they are still able to unravel the sterilized, homogenized damage modern life has brought to living beings.

The following is an excerpt from a very worthwhile read from the late, great father of Agrohomeopathy, Viakunthanath Kaviraj in his article “Symbiotic Relationships”:

“Societies of plants seek each other, but they also seek man, because like attracts like – what is in the same vibration of consciousness will invariably seek each other and find them too. The domestication of plants is a logical outcome of man collecting himself around wild grains, which he then began to grow to feed ever-more mouths. Just as grains grow around man, man grows around grains.

It is also often said that the weed that grows abundantly in the garden of a sick man will be his medicine, from which we can learn that plants are attracted by similarities in consciousness and mentality for their favourite places of growth. A little anecdote from my case-books will illustrate this perfectly

I once had a Scottish friend, who had relations with one of the biggest dope dealers in the vicinity. This man was a rough type, who drank whiskey like water and smoked joints like a chimney. He was rough in the mouth and had the raspiest voice I ever heard. He had a problem – he had an eczema that itched him no end. Could I help him?

Sure, why not? Better than the priest who condemns the sinner, the doctor treats friend and foe – he does not ask how one make one’s income. He asks what type of work he does. When the answer is import export, the doctor may know exactly what is meant. On arrival at the man’s house I saw the yard was overgrown with nettles. I said nothing, but went inside, where the roughneck was drinking whiskey and trying to order his wife around. The living room was huge and a fire burning in the open fireplace, to which the host had stretched his feet and was busily scratching himself voluptuously. His wife asked what I could do for him. So I told her he should get a flogging with nettles, to get rid of his itch. At that he pulled out a gun and told me he’d shoot off my head if I so much as even thought about it. I told him I had a present for him and handed him a few bottles of Glenfiddich, his favourite malt. So we fed him so drunk, he passed out and slid from his crapaud on the floor and was unconscious. Then we went into the garden wearing rubber gloves and cut many bunches of nettles. These we brought inside, then stripped the fellow and flogged him with the nettles till he was swollen and red. We covered him with a blanket and let him get out of his booze. Then I left for the night with my friend to his place and the next day back home.

The next day he called and even his voice was smoother. He had lost the desire to brag and swear and told me his skin was as smooth as a baby’s. If I could come by to get my pay. I told him I did not require to have my head blown off with a big sawn-off shotgun. He told me it was a joke and please come – he is embarrassed by his threat and needs to show his gratitude. Even his wife had asked me to come by. I told him I would be back in six weeks. When I came back, I visited him again. The garden was almost free of nettles. I asked him whether he had cut them down. “No” he says, they had gone by themselves. He had two more flogs by his wife and then by the second time they were almost gone. His wife told me he was much nicer and softer now and his business was booming. Even she had changed, and was much more relaxed. That consciousness left the man and the nettles left with it.”

I dearly love this story, confirming the full circle wisdom my mother impressed me with. It is a strange and wondrous trust that something much wiser than us governs. A very basic and valid clue as to what is needed for healing before one even knows the beings in the areas where one is called. Is modern man willing to listen and honor the wisdom the land holds?

Who’s up for an herbal class?